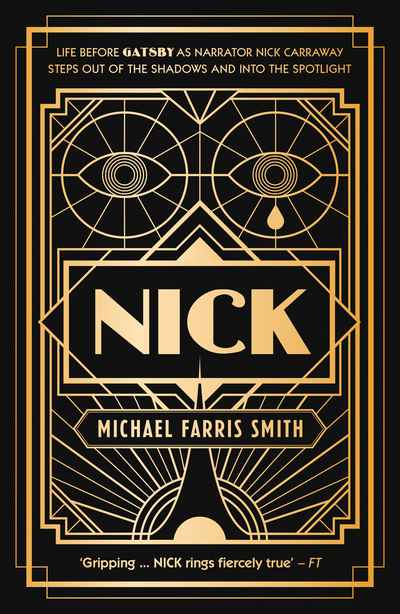 Before Nick Carraway moved to West Egg and into Gatsby's world, he was at the centre of a very different story — one taking place along the trenches and deep within the tunnels of World War I.

Floundering in the wake of the destruction he witnessed first-hand, Nick delays his return home, hoping to escape the questions he cannot answer about the horrors of war. Instead, he embarks on a transcontinental redemptive journey that takes him from a whirlwind Paris romance — doomed from the very beginning — to the dizzying frenzy of New Orleans, rife with its own flavour of debauchery and violence.

An epic portrait of a truly singular era and a sweeping, romantic story of self-discovery, this rich and imaginative novel breathes new life into a character that many know only from the periphery. Charged with enough alcohol, heartbreak, and profound yearning to transfix even the heartiest of golden age scribes, Nick reveals the man behind the narrator who has captivated readers for decades.

'Anybody who believes that the war is over when the enemy surrenders and the troops come home needs to read Michael Farris Smith's masterful new novel NICK. Its stark, unvarnished truth will haunt you.' — Richard Russo, Pulitzer Prize winning author of Empire Falls

'The new Nick is a man fully realised, with a mind tormented by the war and by a first love that waned too fast to a fingernail moon of bitter memory... A compelling character study and a thoroughly unconventional prequel' — Kirkus Reviews

'Nick is an exemplary novel. Smith delivers a moving, full-bodied depiction of a man who has been knocked loose from his moorings and is trying to claw back into his own life' — The New York Times

With precise yet lyrically striking prose, Michael Farris Smith weaves a tale of love, loss, the lasting trauma of war, that deeply inhabits the damaged psyches of an array of people. The title figure of Nick offers a soul for the ages, one that finally and deftly slips into the canon' — Jeffrey Lent, New York Times bestselling author of In the Fall

'NICK is, sentence by sentence, scene by scene, an atmospheric masterpiece of imagination and prose. With scenes that take your breath away and forget to give it back, Michael Farris Smith takes us on an immersive and redemptive journey that travels from the trenches of the Great War, to Paris, to New Orleans and beyond' — Patti Callahan, New York Times bestselling author of Becoming Mrs. Lewis

'Stylish, evocative, haunting and wholly original, Michael Farris Smith has paid tribute to a classic and made it his own. A remarkable achievement that should sit at the very top of everyone's must-read list.' — Chris Whitaker, author of We Begin at the End

‘No shortage of excitement’ - Mail on Sunday

‘Vividly imagined and suffused with pulsing narrative energy and an assured, atmospheric sense of period setting and speech’ – Irish Times

‘Evocative, rich in detail and memorable. You cannot help but think ofGatsby when reading Smith’s sensitively written tale… A book to read and reread’Belfast – Telegraph

‘NICK is an exemplary novel. Smith delivers a moving, full-bodied depiction of a man who has been knocked loose from his moorings and is trying to claw back into his own life’ - New York Times

‘NICK is so pitch-perfect, so rich in character and action, so remarkable a combination of elegance and passion, so striking in felt originality that I am almost tempted to say – book gods forgive me – that The Great Gatsby will forever feel like NICK’s splendid but somewhat paler sequel’ - Robert Olen Butler, Pulitzer Prize-winning author ofA Good Scent from a Strange Mountain

‘Stylish, evocative, haunting and wholly original’ - Chris Whitaker, author of We Begin at the End