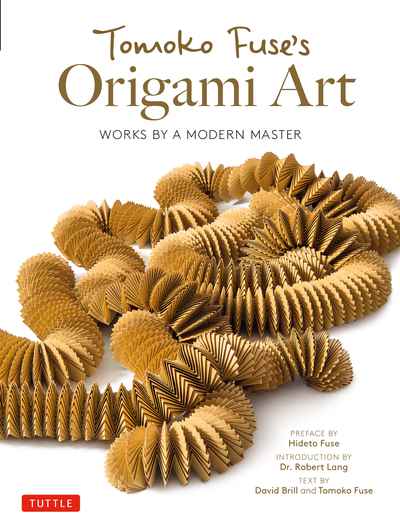 Tomoko Fuse, often referred to as 'the queen of origami,' discovered the art of folding paper at just seven years old. She has come a long way since then, having had her work highlighted in exhibitions around the world, including Paris Origami (Carrousel du Louvre, 1998), On Paper (Crafts Council London, 2002) and her solo show Yorokobi (Bauhaus Dessau, 2004).

An artistic anthology of her most impressive work, Tomoko Fuse's Origami Art can serve multiple purposes: as inspiration for an experienced origami folder; as a truly impressive coffee table book for the artistically-minded; or as a push for intermediate folders to try their hand at modular origami models.

'Familiar or not with the works of origami artist Tomoko Fuse, readers will be astonished and intrigued by the pieces gathered in this anthology of her designs. Abstract yet reminiscent of modern shapes and contemporary sculptures, her folded-paper art transcends the medium of kami, the Japanese word for paper. Coauthor Brill, himself an origami practitioner, wisely lets the art speak for itself, only categorizing it into five sections that will help readers understand the differences: knot, tessellations, infinite folds, repetitive folding, lampshades...A science for artists; an art for scientists.' — Booklist